Call Us Book an Appointment 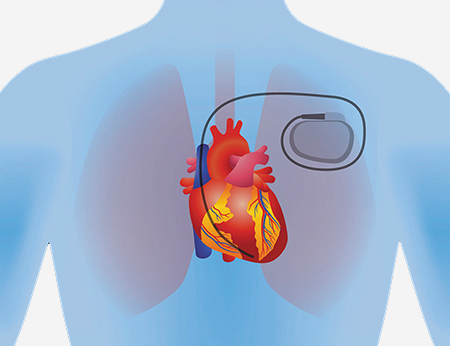 A normal resting heart beats around 60 to 100 times per minute in case of adults and 70 to 100 times in case of small children. However, due to some defects in the electrical signals coordinating the heartbeats, certain people may experience irregularity in heartbeats i.e. their heart either beats too slowly(bradycardia) or too fast (tachycardia) in comparison to a normal heart. This condition is commonly known as arrhythmia. A pacemaker is a tiny, electrical device implanted in the chest or the abdomen to regulate normal heart rhythms in patients suffering from arrhythmia.Although there are various different types of arrhythmia, pacemakers are generally used to treat bradycardia and tachycardia.

How does a pacemaker work?

The pacemakers start working when they detect any abnormality in the heart rhythm, even if it’s a slight one. It sends electrical signals to the heart to balance the normal rhythms. Pacemakers have special sensors that precisely detect body motion and breathing rate which enables them to send electrical impulses when required by the patient.

The type of pacemaker you need depends upon the area of the heart affected and the adversity of your condition. There are three different types of pacemakers:

In order to determine your eligibility for the procedure and to figure out the type of pacemaker you need, you will be required to undergo certain tests and screenings. These include:

The procedure is carried out under the influence of local or general anaesthesia which may be given intravenously. The area is sterilised properly and an incision is made to introduce the leads into one of the major veins and then guided towards the heart using a special imaging technique. The ends of the leads are secured carefully with the affected chamber on one end and the pulse generator on the other. The latter is implanted right below the skin in the chest or abdomen. The pacemaker is programmed to suit your specific requirements.

After undergoing pacemaker placement, you will be required to follow a few guidelines in order to negate unnecessary complications.

The following mark the 9 most recent pages you have visited on ShadyGroveFertility.com. Please click a link below to return to that page.